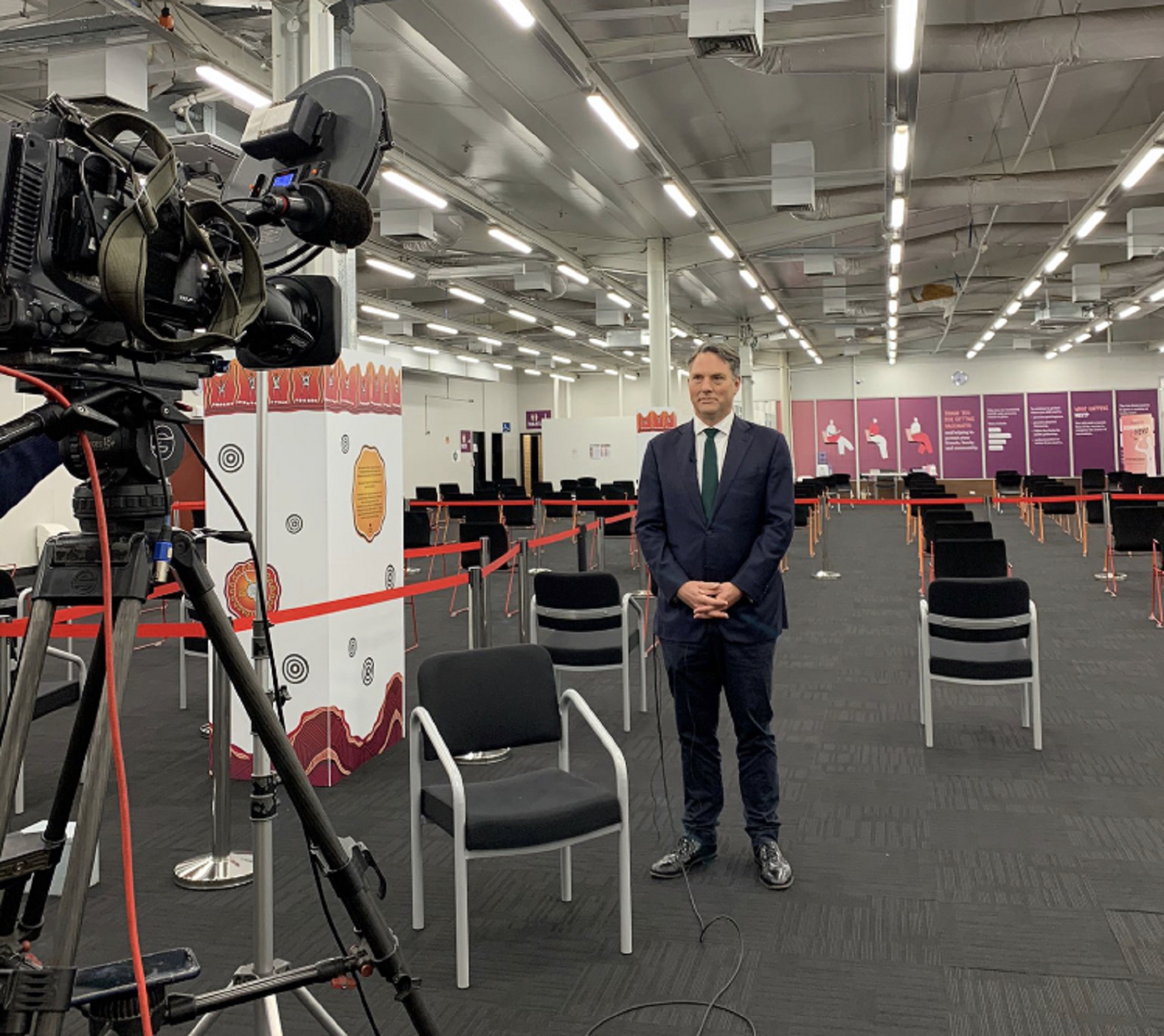 ALLISON LANGDON, HOST: I want to bring our Minister for Defence, Peter Dutton in Canberra and Deputy Labor Leader Richard Marles in Geelong. Gentleman, thanks for joining us this morning. Richard, to you first because we’re all feeling for you right now. What is the mood day one of lockdown four?

RICHARD MARLES, DEPUTY LEADER OF THE AUSTRALIAN LABOR PARTY: Look,  I think there’s- I think every Victorian is feeling the anxiety of 2020 today. It’s perhaps why it’s a bit different, these lockdowns, the one earlier this year and the one now, in Victoria compared to the other states because it really does kind of trigger all the emotions that we had and all the pain that was experienced last year. But that said, I think people are trying to take it a day at a time. I know that is a trite thing to say but it is actually how you get through it. And hopefully it is just the seven days, and a week or so from now we’re on the other side of it. But, you know, our hearts are in our mouths. We’re in that same cycle of kind of riding the emotional roller-coaster of what is the number going to be this morning when it comes out. And it’s tough.

LANGDON: And we’re all feeling that with you this morning, Richard, we are. Peter, you just heard there from Lisa Ford, she is a small business owner, talking to Karl battling just to keep it together. Even as she said there, seven days, she doesn’t know if her business after what she went through last year can survive that. Is there any help going to come from you guys? Obviously JobKeeper has ended. Is there anything that you can offer to Victorian businesses on the edge this morning?

PETER DUTTON, MINISTER FOR DEFENCE: Well, firstly, good morning Ally and just to follow on from Richard’s comments, I think when you speak to family and friends in Victoria there is a huge psychological impact from the last occasion and obviously people are anxious about what will happen over the seven days, beyond the seven days. To go to your question, obviously the Acting Premier in Victoria yesterday announced he was going to provide detail hopefully today about a package of support for Victorians, including for businesses. And, that will a great thing. We have so far provided about $40 billion worth of support from a Federal Government perspective into Victoria. There’s a lot that has been done, a lot that we can do. And, I know the Prime Minister said to the Acting Premier as well that we’ll work hand in glove with the Victorian Government to provide whatever support we can to help people through another very difficult period.

LANGDON: Okay, so, you’re saying on our show this morning that, if they need your help, the wallet will open again?

DUTTON: Well the PM has been clear about that. In terms of vaccines we have already announced that we are going to provide additional vaccines into Victoria. We’ll work very closely with the Health Department there. That has been case despite some of the argy-bargy you see on TV from time-to-time, there really has been a very close working relationship between the states and Commonwealth and that will continue.

LANGDON: Richard, I think just over the last couple of days, and certainly this morning, I see it in your eyes this morning, and I think your eyes sum up what every Victorian is going through right now. Do you think that- and I think when we talk to you it’s like, if this is seven days, it’s like you’re all preparing yourself for it to be longer than that, am I right?

MARLES: Clearly I would be bad at playing poker, I think that’s what I heard in your question. I think that’s- look, we’re all feeling that, for sure. I think that is the kind of difference in the way these sort of short lockdowns are being experienced in Victoria compared to other parts of the country. It’s really hard for our heads not to race forward to this being- maybe this is a much longer period. But it’s why it’s really important to say to everyone, and what I’m trying to do, maybe not so successfully, is stay in the moment. And right now we’ve got a seven- day lockdown. We went through this earlier in the year and I can remember you were doing interviews with Victorians who really were kind of expressing a lot of fear and anxiety at that moment and as it turned out it was just a five- day lockdown and then we moved on pretty quickly. I’m really hopeful that that’s what this is going to be as well. But yeah, I’d be lying if I didn’t say to you our hearts are in our mouths. I’m really thinking this morning about what is the number that’s going to be reported from yesterday’s testing. We’ll get that in a few hours. And we all know how much flows from that. But can I just say, Ally, where I am right now is at the Barwon Health’s mass vaccination centre in Geelong. It’s where I got my first AstraZeneca jab last week. One thing it is doing is prompting a whole lot of people to take up vaccination which is just so important. This is a great facility here. There are facilities like this across the state and, indeed, the country. And it really is important that people take this moment to go off and get vaccinated and that, when they do, they are really kind to the people who are giving them their vaccine, kind to the people on the phone when they’re making the booking. This is an important moment. And hopefully what comes out of this week is actually a much bigger lift in the number of people taking up the option of being vaccinated.

LANGDON: Yes, do us all out of our complacency. Peter, Adam Bandt yesterday, he called it the “Morrison lockdown”- a bit cheeky. Others have called it “churlish”. But when you look at hotel quarantine breaches, the slow vaccine rollout; you’ve only got half a million Australians who are fully vaccinated and we still have aged care residents who haven’t had their first jab. Is it good enough in your mind?

DUTTON: Well, Ally, a couple of points. Firstly, I think we have been complacent. If you’re living in London or New York at the moment and you’ve seen your 70 year-old next-door neighbour contract COVID and become very sick or die, if you’ve seen the devastation of thousands of people a week dying, then you’ve rushed out to get the vaccination, as a 60 or 70-year-old. Here in Australia, I think there is a level of complacency because people have said to themselves “well you know,it’s not here, we’re not at risk, we’re not going to get it, we’ll wait.’ I think what we’ve demonstrated over the last 24 hours is that this can happen very quickly. And that’s why, as Richard points out, it’s incredibly important that people do take that medical advice. There is not a credible doctor in the country saying that people shouldn’t be vaccinated-

LANGDON: Yeah, but what I’m asking you is do you think it’s still okay- sorry, Peter. But do you think it is okay that we are now facing this latest outbreak and we still have aged care residents in Victoria who haven’t had the jab? Access to it?

DUTTON: Yeah but Ally, when you look at some of those cases, in the Whittlesea local government area for example, all of the vaccines have been rolled out to aged care. There are other centres though where, for whatever reasons, because older people have got comorbidities, because they’ve had a flu injection because of the fact that family were worried about their elderly mother or father getting an injection, it is a much more complicated rollout in aged care settings as well as in settings- residential care settings  for example for people with disabilities. It is much more complex than you and I just rolling up to the GP, rolling up your sleeve, you’ve got the jab, you’re out in two minutes. There are lots of medical considerations and it’s a very complex rollout. And, when you look at the numbers of people that have been vaccinated in aged care facilities, I think we’ve done incredibly well, but we want to do more- there is no doubt about that. I think this really is a wake-up call to the general community that we need to get the complacency out of the way, have the vaccination, the risk is very low, the capacity for the health system to deal with any adverse reaction is quite remarkable. We’ve got  one of the best health systems in the world, so please go and get that vaccination.

LANGDON: Yes, very, very good advice there. And Richard, like you we will be hanging on those numbers today. We hope that they are very low. I mean, zero would be good. Let’s see how that plays out. We’ll probably find out around nine o’clock this morning. Richard, look after yourself. Peter, good to talk to you. We’ll chat soon. Thanks, guys.